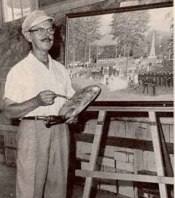 Born and raised in Naperville, Illinois, Lester E. Schrader became a self-taught artist later in life, translating the stories he heard growing up into brilliant works of art that chronicled the development of Naperville from a frontier outpost to a flourishing city. An integral contributor and member of the Naperville Heritage Society, Les also was instrumental in saving and restoring some of the historic buildings at Naper Settlement.

Les was born in 1907 just south of Naperville, and he never wandered far. The house his family moved to on Webster Street a year after Les’ birth was just two doors down from the home he lived in at the time of his death in 1984. It was also just across the street from what has become Naper Settlement, a historic museum and village, and the resting home of his painting collection.

Les was a self-taught artist. Throughout his life, he drew his favorite subjects of horses and Native Americans. By profession he painted signs and created special furniture finishes for Naperville’s world-known Kroehler Manufacturing Company. In general, Les’ paintings reflect his love for his hometown and for the people and events of its past. He has been likened to Norman Rockwell in that his paintings convey heart, optimism and a keen eye for detail.

When the original Pre-Emption House in Naperville was slated for demolition in 1946, he was determined to do his part to save the rich heritage of this building. He researched its past and depicted the building in a painting that later was displayed at a local hardware store. People clamored for more, and Les happily obliged, blending his love of horses and Native Americans with Naperville’s rich history to create deeply poignant scenes for the next 35 years. Les actively preserved our town’s history through his paintbrush, illustrating stories never to be forgotten.

His last painting, "Spirit of 1831," was his contribution to Naperville’s 1981 sesquicentennial celebration. As part of the celebration, he and other town pioneers rode from Chicago to Naperville in covered wagons to mark the event.

Though known mostly for his warm folk paintings, Les also was an accomplished musician who played eight instruments, a skilled carpenter and fix-it man and a lively, witty soul who was blessed with an abundance of good humor. Prior to his death in 1984, Les’ hand could be seen in almost every building restoration on the settlement grounds. From detailed hand-lettering of signs, to nitty-gritty hands-on building repairs, to drawing the specifications for the Blacksmith Shop and overseeing its construction, Les had an unbelievable impact on Naper Settlement’s evolution. He accompanied his behind-the-scenes work with costumed presentations to the public.

In 1987, the Naperville Heritage Society purchased the complete collection of his 42 paintings so that others could share their tribute to the town’s past and learn from this illustrative history.