On April 13, 2006, in commemoration of the City's 175th anniversary, the City of Naperville purchased the original Joseph and Almeda Naper Homestead, located at the southeast corner of Jefferson Avenue and Mill Street, due to its historical significance. Subsequently, two on-site archeological digs managed by the Naperville Heritage Society, conducted in 2006 and 2007, revealed foundation elements of four different structures that once stood on the site, as well as more than 25,000 artifacts.

Once this work was completed, an ad-hoc committee consisting of Naperville Heritage Society, City staff and volunteers recommended the vacant Naper Homestead property be transformed into a self-guided historic interpretive site commemorating Naperville's founding family, Captain Joseph and Almeda Naper. In October 2010, the State of Illinois announced that the Naperville Heritage Society/Naper Settlement received a $350,000 grant through the Public Museum Capital Grant Program for the Naper Homestead project. These funds were used to construct the self-guided historic interpretive site, obtain exhibit signage, site artifact storage and as seed money for future public art.

The ribbon cutting was held November 2 and attendees had the opportunity to walk through the finished site and learn more about Naperville's history from two of Naper Settlement's costumed interpreters. Members of the public also had the chance to view a rendition of the future Joseph Naper statue that will stand at the homestead created by Naperville resident and former "Dick Tracy" comic strip cartoonist Dick Locher.

Joseph Naper was a visionary businessman and patriot with a desire to improve his family and community. His education and life experience forged a deep-seated desire to build and explore. Naper's will and determination to succeed inspired many to follow him. He was a public servant elected and appointed to positions of community trust. 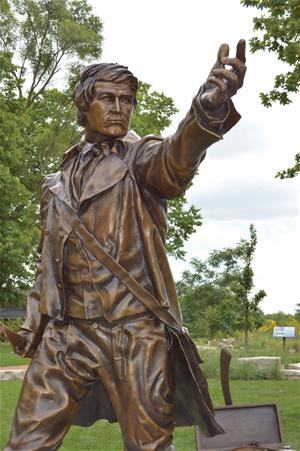 Joseph Naper created more than a physical place to call home. He created a community that to this day embraces the ideals of freedom and democracy.

The Naperville Heritage Society partnered with nationally recognized, Pulitzer Prize-winning cartoonist and artist Dick Locher to conceive an image of Naperville's town founder, Joseph Naper, at the time the community was settled in 1831.

With the help of Naperville's Century Walk public art initiative, the Heritage Society selected artist Jeff Adams to sculpt the Locher design and cast it in bronze. Located near the figure of Naper is another bronze sculpture of a hewn tree stump with an axe and surveyor's tools. The ensemble conveys the relationship between the wilderness and the established settlement.