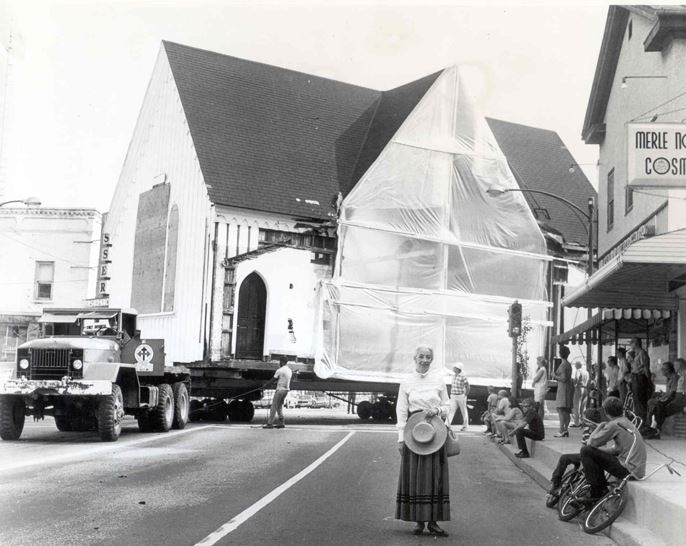 Naperville's pioneers arrived in 1831, creating a robust, thriving community. However by 1969, 140 years later, some of the city's historic structures had fallen into disrepair or were perceived as obsolete. One such building was St. John's Episcopal Church, built in 1864. Saving this church and other important buildings throughout Naperville became the rallying cry of the Naperville Heritage Society, which was formed in 1969. The Naperville Heritage Society raised enough money to move the church across town in 1970 to the city-owned grounds surrounding the museum at the Martin Mitchell Mansion.

St. John's was renamed Century Memorial Chapel and became the first of many buildings that were moved to Naper Settlement. Other buildings relocated to the site included one of Naperville's oldest frame houses, the Paw Paw Post Office, which was built in 1833, and the Meeting House, DuPage County's oldest church. In the 1970s, the Naperville Heritage Society forged a partnership with the City of Naperville, in which the city accepted ownership for every building and structure relocated to or built at Naper Settlement. The society has the management contract with the city for the ongoing operation and development of Naper Settlement and is the direct governing agency for the museum.

Today, there are 30 structures located at Naper Settlement, a 13-acre outdoor history museum that is the only museum of its kind in Illinois that is accredited by the American Alliance of Museums. The museum continues the vision of its founders to save history for future generations and to be a resource for the community.

With a commitment to the community and a focus to the future, the mission of the Naperville Heritage Society is to collect, document, preserve, and support the history of Naperville, Illinois past and present.